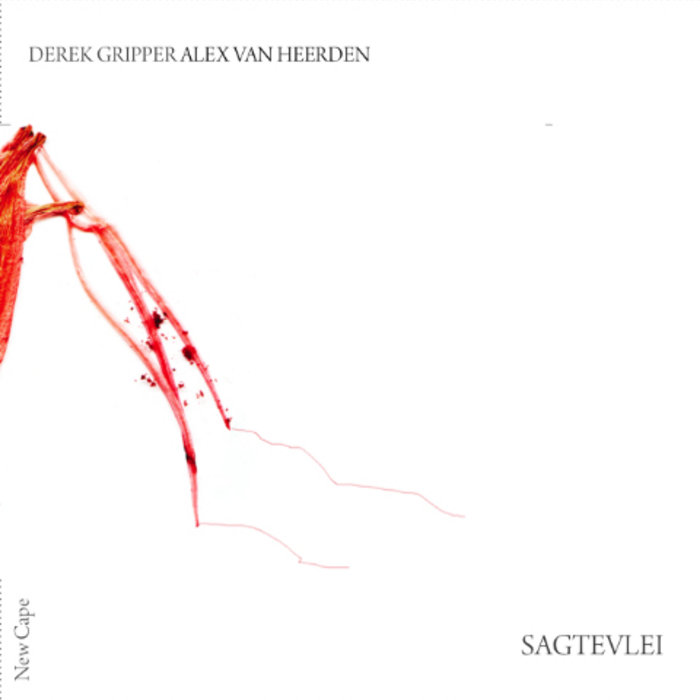 Early in 2001 Alex van Heerden and Derek Gripper were approached by Struan Douglas and Iain Harris of Afribeat to record a live performance for The Wondergigs. The result, a performance for strings, trumpet and accordion, was the first compositional collaboration between these two musicians who would work together for another nine years and create some of South Africa’s most forward-thinking acoustic music.

“unsettlingly beautiful” [Gwen Ansell writing for the Mail and Guardian]

“a fragile, seductive recording that captures the conviction that one would ask of a contemporary classical music born out of the South African landscape..” [Julian Jonker writing for the Mail and Guardian]

"an axotic, endearing album that captures magnificently the hot, wide open spaces where it was born. this is organic music, using strange and powerful instrumentation. accordion, koi-san mouthbow, viola, double bass and cello all make an appearance, creating a fragrant, delicate tapestry. van heerden's trumpet rings through through it, drawing obvious comparisons to some of miles davis's playing on sketches of spain. this is an awesome album for those who have open minds, and is unlikely to be like anything you've heard before."- the star tonight 02/10/03 'keeping an 'i' open' by jeremy daniel

Read more about this album at www.derekgripper.com/acoustic-guitar-albums/sagtevlei-2002/

Recorded at the SABC in 2001 by Reynaud Venter for The Wondergigs Series.

Sometime in 2001 I was approached by an online music site called Afribeat, run by Struen Douglas and Iain Harris, to contribute to a series of live recordings called The Wonder Gigs at the SABC Studios in Cape Town. Their idea was for me to create a collaboration with another Cape musician, using a string quartet. I immediately decided to ask Alex, as we had been working together on lots of other people’s projects, but had not yet done our own. When I suggested the project to him we were in the studio together, doing a string quartet session of You are my Sunshine with Alex singing and playing trumpet, and me arranging and playing viola. This arrangement later became the starting point for a central piece in the Sagtevlei recording, the reworking of the traditional Cape church song Vrou van Samaria. Around christmas time, we spent two weeks together where Alex was staying in Tulbagh. There, embracing the heat of the December sun, surrounded by mountains, we quietly wrote the seven pieces on the recording, quickly, spontaneously, and without a moment of hesitation, doubt or worry. Then we met again in Cape Town to have two rehearsals with Kerryn, Fiona and our friend Brydon. A few days later we made the recording, live, in front of 80 people, at the SABC’s Beach Road Studios. I don’t think anybody expected what we had to present. Perhaps they thought we would bring the groove of Cape Town – Goema, Cape Jazz and Vastrap - onto the string quartet, I don’t know. But what they got was a deconstruction of Cape music, a stark, beautiful, and fragile vision of Western Cape landscapes, and a very intense performance of a kind of music that had not been heard before. Sagtevlei was first released a year later in an edition of 500 copies by an independent label called Open Record run by Ross Campbell. Ross conceived of this label as an outlet for South African music that was too out there for the existing companies to handle. He managed to release quite a number of albums and get them into shops across the country. Sagtevlei was nominated for a Geraas award for best classical album. Liner Notes from the Open Record Release This project began in January 2002 when I joined Alex on Sagtvlei, a small farm on the outskirts of the Boland town of Tulbagh. What followed was an exchange of ideas and music, centered around our shared desire to create an uncompromisingly understated music, a trance-like introspection. Alex had recently returned from Sweden where he had been ‘seduced’ by the fragility of Scandinavian electronica. My own interests were focused on the ‘glitches,’ scratches and harmonics in the sound of the viola, and the ‘just intonation’ implied therein. During the weeks at Sagtevlei our compositional process became a means to introduce each other to our respective musical worlds. For me, listening to old recordings and spending evenings listening to Alex’s accordion was like hearing the music of the Western Cape for the first time: the wealth of melodies and rhythms that have grown out of musical life in the Cape returned to me through the spirit of one remarkably individual musician. My own experience of this music became a search for new ways of presenting this history in a musical landscape born out of the geographic one in which we worked and lived. Our daily meetings, under trees, in the kitchen, by the fireside, were tentative and contemplative. The music on Sagtevlei was born of these meetings, which, rather than being purely musical exchanges, were ones of appreciation and excitement at the scope of possibilities presented to us. Sagtevlei remains as a memory and quiet celebration of this particular time and place. (Derek Gripper, Hälsingland, Sweden, January 2003) Alex van Heerden vocals, accordion, trumpet, khoisan mouthbow Derek Gripper viola Brydon Bolton double bass Kerryn Bailey violin Fiona Greyercello

a little water to drink